Photo by Timothy Eberly on Unsplash

I was mindlessly scrolling through Twitter one night this week, and came across a tweet from a fierce female CEO I follow: Sally Bergesen, founder of women’s running apparel maker Oiselle (I’m a huge fan!).

Sally was musing about why a lot of people run with their phones, and threw in her own opinion.

What happened next was a Twitter storm. A lot of people simply shared the reasons they choose to run with phones - to take pictures, listen to music/podcasts/audiobooks, use or be reachable in an emergency.

But a small handful of women read something into the tweet and felt the need to go on the offensive. Like these (the super curious can read more here)... 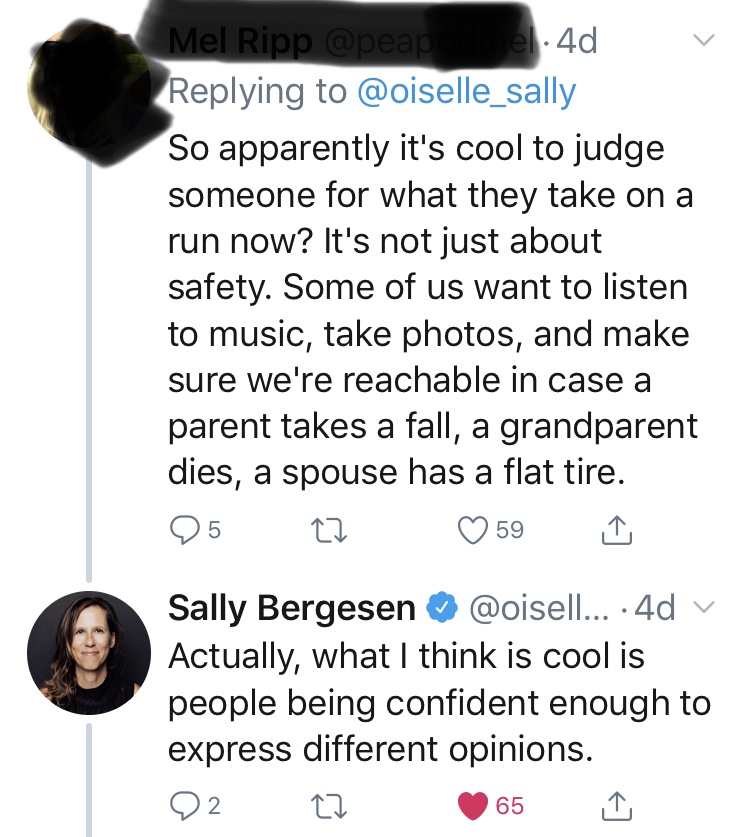 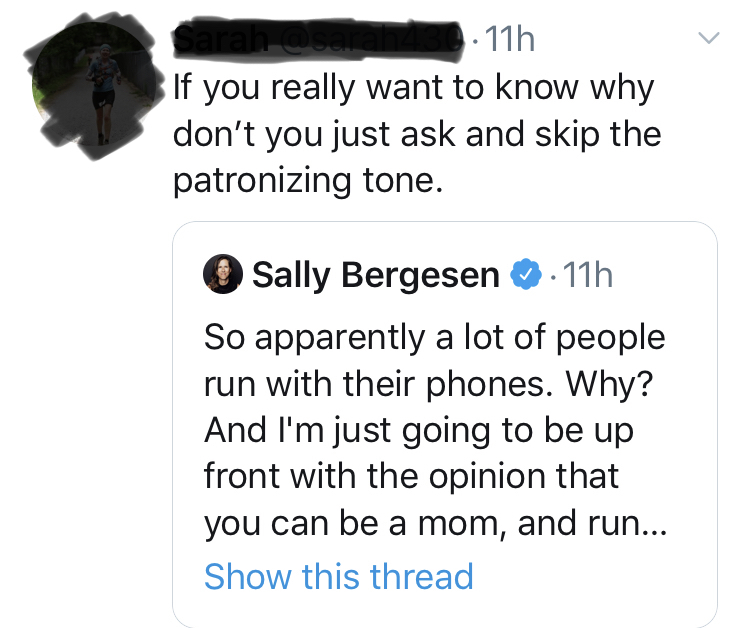 To be honest, the tweet landed on me in an odd way. My initial reaction was self reflective. I make no secret that I have a love-hate relationship with technology. I believe (as Sally also noted in her follow-up Twitter thread) that technology is getting in the way of authentic connection with others. If you think about it, this very article is kind of proof of that, but I digress.

I immediately went to a reflective place...

Hmmm, what would it look like if I went on a run without my phone? When have I ever relied on my phone for safety when out on a run? Does this mean I’m too tech dependent?

But as I scrolled through the other replies, I was surprised by other reactions. Because it didn’t even occur to me that I was being judged in any way by Sally’s tweet (Hello? She doesn’t even know me!), I was completely curious about these responses from people who took offense.

And so I consulted a friend (cuz that’s what we do, right?)...What did she think about the tweet? And she said, well, it did seem a little “judgy,” but she personally wasn’t offended.

But then I told my friend this tweet was from the CEO and designer of a premium line of women’s running apparel, and that it’s literally her job to ask questions about women’s running habits.

That changed everything for my friend. But it was a piece of information that Sally’s followers already had, and they still interpreted the tweet to mean they were being judged.

Does this story sound familiar at all? You don’t have to spend much time in social media to see it pop up multiple times a day.

So what’s really going on there, when we choose to interpret something that someone else does to mean something negative about us?

Because it feels good in the moment. Maybe even like a release. But then, the moment passes, and we find ourselves stalled. Drained. Wondering what happened to the last 45 minutes we can’t account for.

And for what? Something we saw someone else do that we interpreted in a way that was hurtful to us? Interesting. So let’s dig into that...

This has nothing to do with me.

If you really think about it, strip away all the layers and bullshit, wouldn’t you agree that you’re not the center of the universe? So why do we so easily jump to the conclusion that something another person says or does has anything to do with us?

But that tweet had nothing to do with them. Maybe Sally did actually judge people who run with their phones. Maybe she believes that your experience is much richer without the aid of technology. Or, maybe she truly was just curious. Or, maybe she intentionally used language that would stir up emotions so people would chime in with their opinions. After all, she later stated that her objective was to inform her designs.

It doesn’t really matter, though, what her intention was. First, nobody will ever know unless she tells us. And second, even if we did know that she was secretly judging, it still has nothing to do with anyone but Sally.

This concept is illustrated so beautifully in The Four Agreements by Don Miguel Ruiz. In The Second Agreement: Don’t Take Anything Personally, he says: “When you take things personally, then you feel offended, and your reaction is to defend your beliefs and create conflicts. You make something big out of something so little, because you have the need to be right and make everybody else wrong.”

But ultimately, he goes on to say, what you feel and do is just a projection of the agreements you have made with yourself, and have nothing to do with that other person.

And so you can see how we get ourselves locked into an endless argument, with each of us trying desperately to project our own agreements onto another person, and no one is going to give in.

Or maybe it does!

So maybe the tweet was judgmental. Maybe it wasn’t...we’re never truly going to know the true intention behind it, right? But still...you take it personally because maybe you agree on some level with what was said.

It’s possible that you aren’t fully confident in your choices. In this case, maybe the strong reaction came because deep down, those women feel they’re a little too dependent on tech (or any other story that tells them their choice is wrong in some way). And when someone comes and calls it out, they feel a strong need to defend that choice.

A friend recently shared a fascinating analogy. Disclaimer: I have no idea if the following analogy is true, because I don’t have two guitars to test it. But it feels true enough to share.

If you place two guitars tuned exactly the same across from each other, and you pluck the string of one, the same string of the other will start to vibrate the same note without actually being touched.

The reason I believe that to be true without testing it is that we are all connected energetically. And when we experience a vibration from someone else, if we’re tuned into that same vibration, it will strike a chord in us. This is why we just click with certain people, or why we meet fighter energy with more fighter energy.

So when we see something outside of us that bothers us, it’s often because we see something inside ourselves that we don’t like, don’t accept or possibly haven’t even come to acknowledge. And so our energy vibrates on that note.

Now, there’s also the possibility that you simply sum up that she’s just a super judgy person who is always finding fault in others. (We all know someone like this, don’t we?)

In that case, it can be really helpful to take yourself out of the equation. Basically, go back to the reminder that this is not about you. One way to do this is to ask yourself if her behavior would have changed in any way if it were directed at someone else. If the answer is no, it’s not about you.

Her judgement and attitude is all about her. We could spend a lot of time digging into what drives that behavior, but…well…is that really how you want to spend your limited energy?

You have a choice

The most valuable gift we’ve been given as humans is that we are always at choice. Every minute of every day, we get to choose how we’re going to show up in life. Most of us spend a lot of energy squandering those choices…like giving someone else the power to offend us or hurt our feelings.

Again, Don Miguel Ruiz: “All the sadness and drama you have lived in your life was rooted in making assumptions and taking things personally.

“We create a lot of emotional poison just by making assumptions and taking it personally. ...It is always better to ask questions than to make an assumption, because assumptions set us up for suffering.”

Why would anyone choose to suffer because of something another person did that was completely outside our control, and meant nothing about us anyway?

Want to learn how to stop doing that? It’s a matter of regularly practicing a simple three-step method I’ve shared with countless clients. It takes consistent practice, but you’ll start to notice it working immediately. What personal trainer can promise this??

I cover these three steps in this 90-second video...

The next time someone does or says something that brings up that flash reaction because of the way you’ve interpreted it, try it! And let me know what comes up for you. My prediction is that you’ll notice you’re feeling lighter, and that your productivity improves, and that you generally start to give people the benefit of the doubt more often.

the superpower of self love

Why is it so important to be right?